Meeting called to order by President Jay NE2Q at 8:24pm

Marty KA1WBN mentioned making phone contact with Art Santella K1VKO. Art mentioned he’d like to return to the hobby more, & possibly putting up 2-Meters. He now has the frequencies & PL’s so he can listen for now.

(These will be joint GNARC/CTSARA events)

Jay said he has the Treasurer’s figures from Jim KC1FB for Field Day:

Jay proposed that the club purchase some used ICOM IC-718 transceivers to be used for future Field Day’s, due to their ease of operation. Toy said he thinks the club may have one, & will report back at a future meeting.  Jay contacted the family of Lewis Tenzer N2LU (Silent Key) and is waiting to see if they will donate his IC-718 to GNARC.

Extra special thanks to Tim W1GIG & a round of applause for so many years of dedication to Field Day.

Toy K1WYQ commented that extra measures need to be taken to be sure that any/all visitors are (almost) guaranteed to make a contact!!!!

Toy did a raffle: Kathleen KB1RJQ won a Leatherman!

Jay made a motion to adjourn the meeting, seconded by Sam at 10pm

Meeting called to order at 8:03pm by Pres Jay NE2Q.

Visitors/returning members introduced themselves: Greg Bitondo Sr N1KIT, Marcel Vasile YO7ARY from Romania, & non-HAM Robert Turner (with an antique receiver he “rescued” from being dumped). Tim W1GIG took it to turn it over to a HAM-related museum.

Condolence card for “Silent Key” John Wistrand passed around for members in attendance to sign, sec’y to mail after the meeting.

Motion made for accepting May’s minutes on club website by Toy KA1WYQ, seconded by Steve N1SV.

Point brought up about a discrepancy on GNARC’s website, as to when/where club meetings are being held. Sec’y to address this with webmaster.

Meeting called to order by President Jay NE2Q at 8:03pm

Members went around the room introducing themselves

President Jay asked for a congratulatory round of applause for (me), for my efforts toward finding Stop & Shop as our new “clubhouse”. (thanks guys)

Discussion of Field Day. Jay said he scouted nearby restaurants as an alternative for FD food.

Jay made a motion for the April minutes to be accepted (by ????), seconded by Hugo AA1XV?,

VP Sam NV1P made a repeat announcement for Saturday’s Tree Festival, to be held at Gallagher’s Estate, Cranbury Park, looking for operators to assist with traffic & parking.

Toy KA1WYQ commented about the Bloomin’ Metric Bike Tour, stating he’s waiting for officials to contact him. At this point, seeing as it will be tough getting operators, he will be forced to tell them that GNARC will not be able to help with this year’s race.

Sec’y/PIO Marty KA1WBN reminded members (again) that the “Inverted V” antenna on the Norwalk Library’s roof needs to be rebuilt, in order to use it for the Special Event station that is planned for later this (spring) season. The antenna suffered catastrophic damage as a result of either the last blizzard, or hurricane this area experienced. Gus W1BV, Jay NE2Q, George AB1QK & Marty KA1WBN will coordinate a time for the rebuild. Jay also mentioned “Library Day” is coming, & suggested (the library) be contacted & asked whether a transmitter can be brought inside the library, during that event, for the purpose of demonstrating the hobby (& seeing as there will be music playing, any HAM radio-affiliated “noise” theoretically should not be a problem. Marty said he’d contact the director & see what she says. (Note: “Library Day” was in April…….previous comment is now moot, & plans will move forward for an event station).

Marty also added, for FD, that he spent half an hour on the phone with a representative of the “Big Brothers/Big Sisters organization, in an effort to introduce GNARC, tell them about HAM radio, & invite them to FD. Similar invites went out to the Boy Scouts, Boys & Girls Club, & numerous press agencies. More organizations are also being contacted.

Toy commented about GNARC’s repeater being on the giant AT&T tower, stating the City of Norwalk no longer pays the rent. Jay NE2Q, Tim W1GIG, & Toy KA1WYQ will be keeping tabs on this issue.

At 8:40pm, Jay turned the floor over to Sam NV1P for his presentation about printed circuit boards designed on a PC. Presentation concluded at 9:35pm (good job Sam)

Tim W1GIG made a motion to adjourn the meeting, seconded by Jim KC1FB at 9:45pm

There are no items for sale at this time.

Note: Prior to the meeting, some members met for pizza at John the Baker Restaurant, on Long Ridge Rd. A number of those attending felt (the pizza & service) was exceptional.

GNARC President Jay NE2Q announced GNARC will no longer be meeting monthly at Shoprite in Norwalk, due to other organizations (who also enjoyed the privilege of using the community room) abusing this privilege.

Members went around the room introducing themselves by name, call, & club affiliation. There were 28 people attending, with 3 or 4 of those being NON-hams. Unfortunately, no others from other clubs attended, only those from GNARC & SARA (most likely due to an impending snow storm). This storm also caused guest speaker Betsey Doane K1EIC to reschedule her appearance until (possibly) next month’s meeting.

Floor opened up to members regaling each other with stories of unusual contacts, etc. There was much laughter & all had a great time.

GNARC wants to say “thanks” to SARA for hosting the meeting, & looks forward to another joint meeting in the future. There was plenty of parking for everyone in the Government Center’s parking garage.

Meeting adjourned by Jon WB2RYV for refreshments at 9:20pm.

Don KA1TZR gave a presentation about the history of the Greater Norwalk Amateur Radio Club.

Old Business: Marty KA1WBN gave an update about the Norwalk Library, in preparation for a special event station planned for springtime, to boost popularity of amateur radio & hopefully generate more club members for GNARC. There is a 5-Band tunable receiver inside (the library) for public use by anyone interested in getting into the hobby. It uses an “inverted V” type antenna on the library’s roof. It is the hope, that for the (special event) station, extra coax can be connected to this “inverted V” & used to make contacts. Additional news is expected in the coming months as this event takes further shape.

Sam NV1P reminded members that dues are due March 31st, & those members whose dues are not paid by that time risk deletion from GNARC’s roster.

Public Service: Paul N1II announced that there will be an exhibit at Cranbury Park in Norwalk on Sat, May 11th, & any club members available are needed to assist with traffic control & parking, from approx 9:30am – 3:00pm.

A few New Members were in attendance & introduced themselves.

Sam NV1P & Marty KA1WBN reminded members there would be a joint

meeting next month at CTSARA’s clubhouse. It is hoped that in

The guest speaker for this joint meeting will be Betsey Doane K1EIC. Due to

this joint March meeting, GNARC will not hold its own meeting, but will

Treasurer’s report: some members have paid, but specific dollar amounts are not available by meeting time. Treasurer (Jim KC1FB) not in attendance.

An announcement was made that Jay NE2Q asked Ned KA1CVV to coordinate “Echolink” back on the 2 meter repeater.

There was brief discussion of the pros & cons of having both Echolink AND IRLP on both repeaters, & cross-linking them together.

Sam NV1P passed around a condolence card for (silent key) Lewis Tenzer N2LU, which was signed by all members present & mailed to the family within the next 2 days. 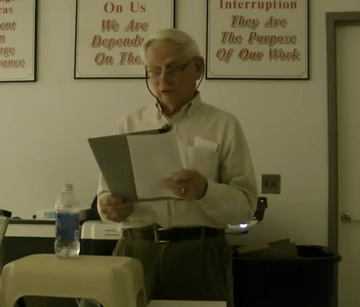 From the February 2013 meeting- Don Hudson gave the following presentation: