This past Saturday, local hams provided communications support for the 2018 Lighthouse to Lighthouse Race. Hams were in two support boats, on Sheffield Island, in the US Coast Guard Auxiliary tower and on the beach. We used the 146.475 repeater, and also coordinated comms on various marine channels. We assist in tracking progress of the race, helping stranded paddlers, and ensuring that all paddlers are accounted for at the end of the race. We were in communications with the USCG and support boats on marine channels as well as using our repeater.

Thanks to Marilyn KB1YYO (boat), Dimitri K1DCG (tower), Jon AI1V (boat), Paul W1PPL (Sheffield Island) for volunteering and doing a great job on the radios.
Thanks also to Greg KC1CRT and Bill WG1HM who were on coast guard duty and relayed info to Dimitri in the tower.

Michael N1PLH and Joe KC1AUH also showed up on race day to help me at race control. I would have had a much tougher day had they not appeared.

N1PLH also brought his drone, and you can see some of the photos attached.If you look at the race control tent, you can see my buddipole tripod setup with a J Pole configuration on top. This was for the marine channels. A small mag mount on a pie plate was used on top of the tent for 2 meters.

Also a link to his video: https://www.youtube.com/watch?v=6YuY4Dd185o

The radio box (Yaesu FT-8800 and SeaRanger marine radio) was powered by one 15ah Bioenno battery. 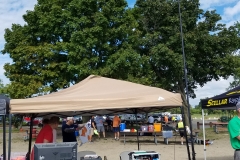 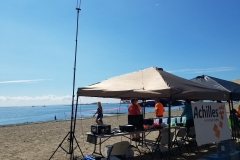 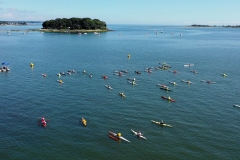 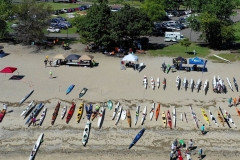 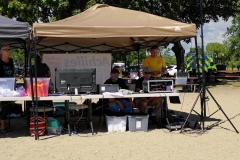